October 19, 2022
#Group News
Share
On October 19, 2022, we celebrated the full opening of Les Ateliers Gaîté and inaugurated a three-floor shopping and lifestyle destination, the final part of the people-centric and sustainable mixed-use redevelopment project in the heart of the Montparnasse district in Paris.

Developed in partnership with the City of Paris and designed by famed architect Winy Maas and his architecture and urban planning firm MVRDV, this 1.5-hectare programme offers everything that makes a neighbourhood’s life convenient yet vibrant, from housing to offices, shops, dining, entertainment and public services, all in a welcoming environment and with sustainability at its core. With more than 5 years of work involving deep consideration for how Parisians live today, Les Ateliers Gaîté integrates the revived district with the local community, creating better connectivity with the surrounding neighbourhood while acting as a catalyst for the broader regeneration of Montparnasse. The mixed-use redevelopment manifests our commitment to creating unique, sustainable places that Reinvent Being Together.


A cornerstone of the revived Montparnasse district

Montparnasse is not only a district with a rich artistic and cultural history, it is also a dense residential area, the French capital’s second-largest business centre and a major gateway to the city thanks to its busy train station and public transit links.

The transformation of Montparnasse is one of the city’s most ambitious urban development projects. With a view to moving away from the car-centric, concrete-dominated urban planning of the 1960s and 1970s, the district began its metamorphosis in 2017 to adapt to new lifestyles. Thanks to its strategic central location, Les Ateliers Gaîté has been designed as the beating heart of this new evitalized and improved district located in the 14th arrondissement of Paris, also anchored by the renovation of Montparnasse train station in 2021, extensive renovation works on the Montparnasse Tower scheduled for delivery in 2024, and the redevelopment of the Pullman hotel, handled by the Group and opened in 2021.

After more than five years of work, the transformation of the block is completed with a reclaimed and extended pedestrian area, six entry points offering direct access from the street to all components of the real estate programme, a new subway entrance, and the creation of a “destination” dynamic leveraging the convenience and vitality of the block’s offering.

The notion of openness is core to Winy Maas, a co-founder and principal architect at MVRDV, and his team’s approach for the rejuvenated block. They deliberately designed the entire area – with shops, houses, offices, a hotel and a public library and childcare centre – to be wide open to the city. They developed the programme with an arty perspective. The way it presents its activities is a little like a “cabinet of curiosities”. Each space, whether a shop, apartment, office or room, stands in its own “box” designed like “Mondrian architecture”, which can be either “pulled” inside the structure or “pushed” towards the city. In line with this approach, TAPE OVER, a Berlin-based art collective, designed the colourful glass façade and two works of art inside the centre. Openness and sustainability were also central to the approach that URW's Concept Studio Europe developed for interior design in the shopping and lifestyle destination.

The Ateliers Gaîté represent a global investment of more than 500 million euros on a 1.5-hectare site. An average of 650 people worked for 5 years on this exceptional site and 82,000 hours of reintegration were created in partnership with the City of Paris. In the end, nearly 1,000 direct permanent jobs and 2,000 indirect jobs will have been created. 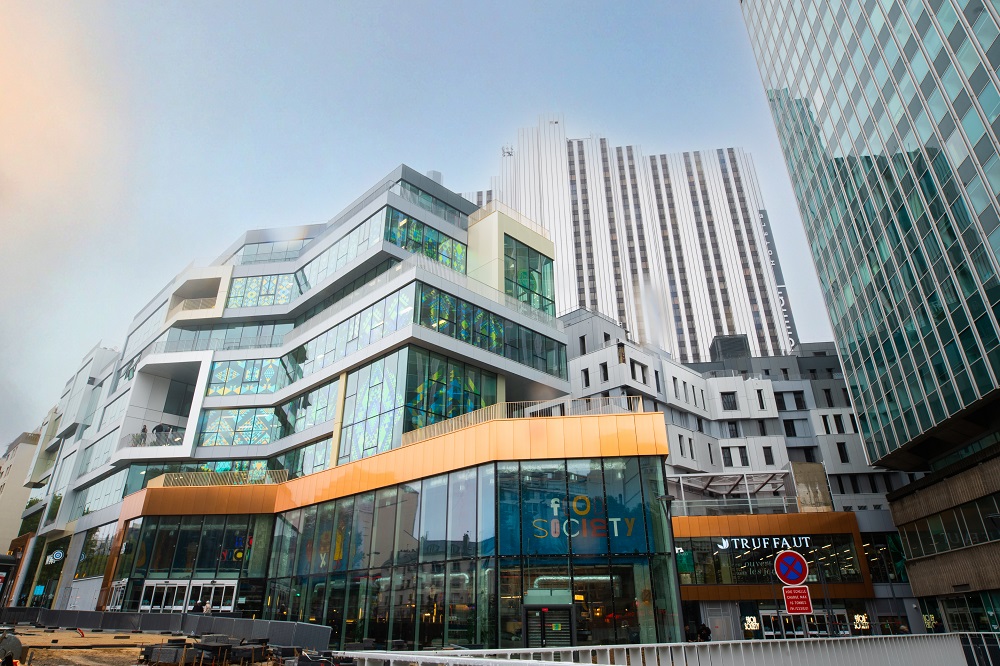 Westfield Rise – Your Vision, Our Stage